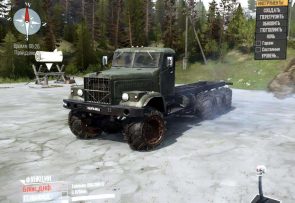 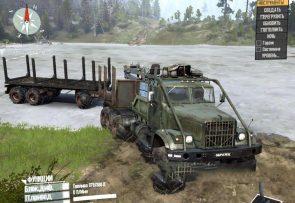 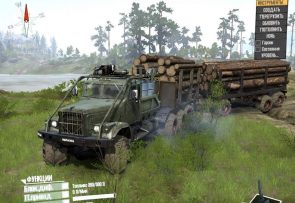 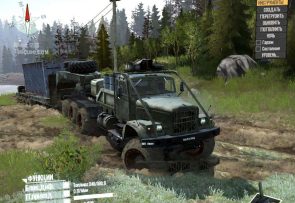 I took the mod from Markoth Janos (CyTec), and decided to put it in order.

For those who are not interested in detailed information:
15 of its addons + 10 standard.
model with the average engine with average passability. creeps slowly but crawl everywhere fans of the zil 131 8×8 mod from darius will appreciate. eating just Nemer fuel (during the tests I noticed consumption \ min to 51 liters). The question about cheating, understood the essence of the problem at the end. The point is that you can just put on a sea of ​​add-ons on a truck from which you can say that this is a cheat mod. but no one forces us to load truck with addons, it all depends on you.

and now in more detail:
1. Completely rewritten suspension from scratch (my pride without fine-tuning to the ideal). The author of the original crease is most likely to twist the drum along with Yakubovich when creating the suspension and enter random numbers. the suspension was just about anything. My suspension is spelled out perfectly and has been tested for several days. different stiffness on different axes. Suspension moves normally work not zalazyat in texture. 4 axis (rear last) did not do lazy, the drive remained, but the angle of rotation was reduced as the front cause of the wheel. Lovers of wading through the forest of good news-the width of the wheels is not too increased.
(the whole suspension is tuned to arched wheels, if you change the wheels then rewrite the suspension, otherwise the wheels will crawl into the textures as well as the wheels that hang in the air in width)
2. I didn’t touch the box. The engine power was thrown by 20 mares.
3. registered the animation of tanks with fuel, which was not generally less calculated the total volume of all three tanks. also reduced the number of xp.
4. I do not know for what reason, the author has crippled the texture. shock content damn. brought back the native texture with some changes, so much better.
5. took Zil 131 8×8 removed from him the arched wheels and part of the addons. I put on a lot of addons. on that and such a weight (too lazy to clean, clean in the update)
there are dozens of improvements and changes that I did not describe because I stupidly forgot. just the little things shorter)

CAREFULLY! all those who have the original mod of the author kraz, will be replaced with at least the texture of the track on mine. it does not fully replace the original mod (only the textures are not rewritten and the packs will be duplicated from the original cracks because of the shortcuts), I advise you to remove it and replace it with mine. And further! everyone who has a divine zil 131 8×8 from darius, then my mod will replace part of its files when it is thrown into a folder – there is nothing wrong with that since they are no different from the original, but it is better to agree to a replacement.

mod will be updated and refined. If the mod comes in, try contacting the original author for more changes and improvements. It is planned to remove the excess in the update to correct the jambs if they pop up and make the mod standalone in order to eliminate the replacement of files, also add more options for add-ons.